What is the best time of year to go on holiday to the Cape Verde Islands? That is a frequently asked question.

Temperatures in the Cape Verde islands are summery all year round. Here on Brava, nighttime temperatures fluctuate between 18 degrees in winter (December, January, February) and 28 degrees in summer (May, June, July). During the day there can be outliers up to 35 degrees, when the sun shines mercilessly. But over all you can say that it is always “summer” in Cape Verde. And dry.

‘Probability of rain’ season
Yes, there is a kind of rainy season, but experience shows that it is more of a chance-of-rain time. From June on, everyone here gets a bit restless: would it rain in July? And if so, will there be enough rain to sow and harvest? Enough to turn the Cape Verde islands into literally Cabo Verde? Cabo Verde is the Portuguese name of Cape Verde and means Green Place. Portuguese explorers probably first made landfall here sometime in the second half of the year. In October, I guess. Because after the first splashes in July and a few showers in August, the islands turn into green oases. And it will remain that way until January. Then the land starts to dry out again.

Drought
Roughly you can say that the rainy season on the Cape Verde islands takes place between July and October. But that does not mean that it rains every day during that period. If only it were true… Now -in 2020- it has been four years since Cape Verde had a good rainy season. Imagine four years without substantial rain… Many people live here as in Europe sixty years ago: with a few goats, some chickens, a pig and sometimes a cow, and a field to grow vegetables on. There is not much employment. Many Cape Verdeans live by the day. But without rain on your land you have to buy your food in the store. That food is imported and is therefore expensive. Without rain, no weeds will grow, which you can dry and keep for your goat and your cow for the dry season. So you slaughter your cow before it falls over by itself.

Well, let’s say that here on the Cape Verde islands, we also provide good weather guarantees in the rainy season. In fact, here at Kaza di Zaza we give a big discount for a totally rained holiday!

The weather in the summer holidays
Heat builds up in May, June, July. The seawater gradually gets the same temperature as the air above it. Sunny days alternate with cloudy days. From July, a splash may fall at night. The next day it feels like a sauna, because of the high humidity. The day and night temperatures differ little and do not drop below 24 degrees. The sea is calm.

The weather in autumn and winter
The islands are magically green. Sometimes there is still a shower in October or even November. Everyone is always happy about that. And the next day there is always that sun again. November, December the wind starts to blow from a different angle and the sea can bump a bit more. This will remain so all winter and spring. Here around Kaza di Zaza on Brava we always live outside – barefoot and in shorts. But in those winter months I sometimes like to put on a cardigan in the evening. Socks? Never!

Brava at the best
Back to the initial question: what time of the year is best to travel to the Cape Verde islands? I would personally say: between the end of September and January. Then I think Brava is the most beautiful. So sweetly green and full of promise, with food for everyone. But maybe that’s because, after living here for eight years, I now know it so inhospitable here too – dry and dusty and shabby.

And I always notice that the flowers continue to bloom on this Ilha das Flores, Brava the flower island. Those beautiful red-flowering hibiscus shrubs, which are used here as a land fence on Brava. Even now, after four years without rain, those bushes are still blooming! 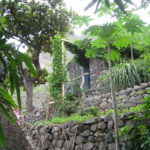 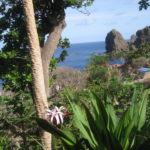 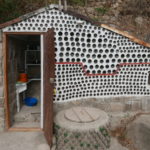 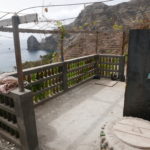 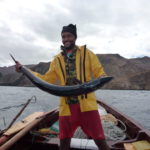 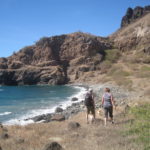 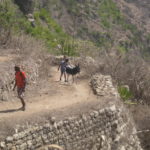